With that sentiment in mind, I pulled Terence Scully’s treatise – The Vivendier – from my sagging bookshelves and revisited Scully’s superb and scholarly interpretation of this fifteenth-century manuscript. Thanks to meticulous scholarship, and relatively unusual when it comes to these sorts of manuscripts, the name of the person associated with the manuscript is known. Actually, two men – Doctor Jacques Despars and Jo de Herzelles. Both men lived in the region of Cambrai-Torunai, or northeast France.

As Scully says, there’s not a lot to choose from in regard to extant French culinary works from the time period and as I mull over the text, I’ll confess that I’m happy that Scully transcribes the original text. Consider the scan below, from the original manuscript, now in the Gesamthochschul-Bibliothek Kassel. (This is ust an example of the text and is not the actual recipe.) 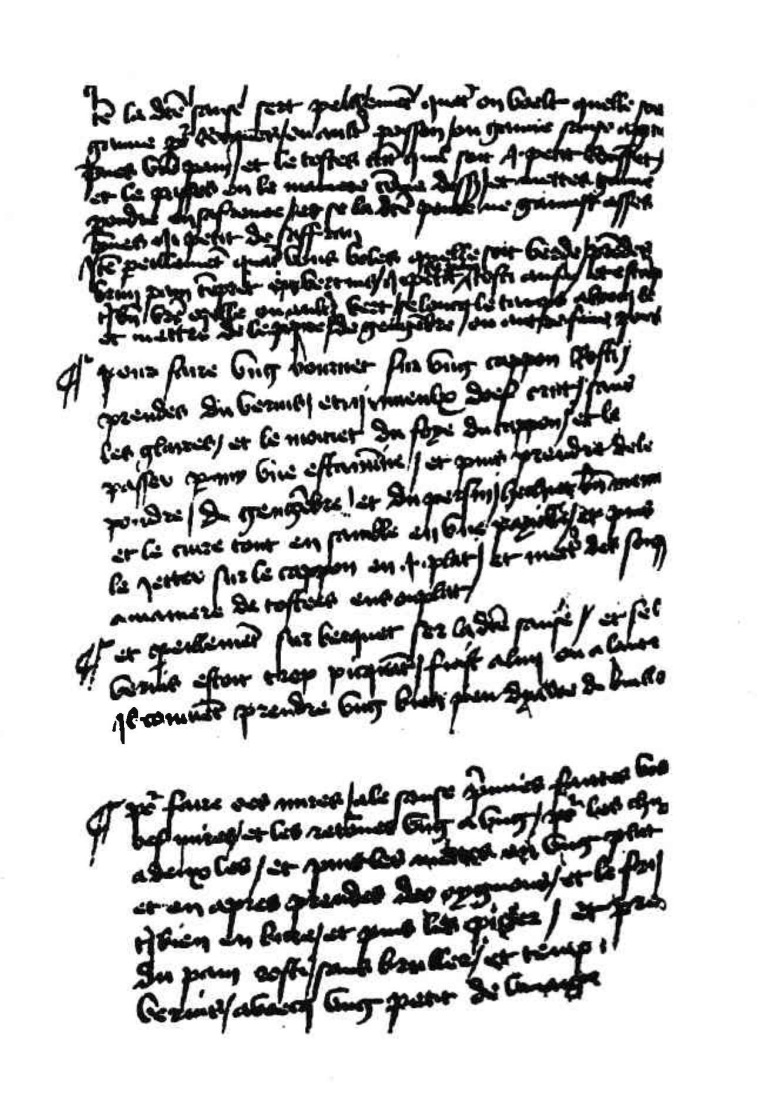 Above all, one thing becomes clear here: The importance of accurately deciphering this script. And that’s why I stated in my book that when adapting and recreating recipes from transcriptions – and not the original texts – the qualifications of the transcriber are paramount, as is the person who does any transliterations. One way to gain expertise in reading these texts lies in books such as Jane Roberts’s Guide to Scripts used in English Writings Up to 1500 (The British Library, 2005), Bernhard Bischoff’s Latin Paleography (1990), and Michelle P. Brown’s A Guide to Western Historical Scripts from Antiquity to 1600 (1990). Plus some of the links and references I mentioned in my book.

Deciding on a recipe entails a number of factors besides the transcription. Translation software doesn’t work all that well for older versions of modern French, for example. See below for Google Translate’s take on the recipe I chose.** You’ll need some help with old usage, no matter how good your French (or other language) is.

About that recipe. Ingredients available to you make a difference. So does your personal taste. I do not like liver in any shape, form, or way. But I decided try the recipe as written. Or at least as I interpreted it.

Meat dishes in The Vivendier lean more to rabbit and hare in regard to game, as well as fish. A few recipes featuring chicken caught my interest, as I loaded up on chicken thighs a few weeks ago, freezing the extras.

I settled on recipe #56, Pignagoscé sur chapons or Pignagoscé on Capons, a rather untranslatable dishname, as Scully acknowledges. Scully provides a transcription:

This is my translation of the recipe, highlighting the action words and indicating what you need to make the recipe work:

[The capons are] well cooked in good bouillon, cut into pieces, then sautéed in fine clean lard ; take the livers of your capons and grind them well ; then take well-toasted bread, tempered in good verjus, pass all through a sieve, ginger, cloves, grain [of paradise], mixed up with red wine and sour vinegar ; boil all together ; and with some parsley stripped of leaves ; pour it while still hot over your meat.

So what to make of this recipe?

To begin with, the dishname – Pignagoscé – presents a real puzzle, and Scully attempts to guess at the meaning, because he says the word is absent from glossaries and dictionaries. He takes a stab at translation by dividing the word into sections – pigne ( “pine-cone”)  and agoscé (angoscier/angoissier or “to vex, afflict, fill with anguish). As to whether or not the dish resembles “anguished pine-cones” is anybody’s guess. (p. 79) The recipe is similar in composition to one listed in Constance Hieatt and Sharon Butler’s Curye on Inglisch, “Black Sauce”.

4 chicken thighs, trimmed of extra fat, cut into three pieces each with a cleaver (or whole whole chicken, cut into pieces, bones and all; this way you get a free liver! Make sure you don’t shatter the bones when chopping into legs and thighs – if you do, pick out the shards)

1 teaspoon salt or to taste

1 chicken liver, sautéed in lard, puréed or pounded in a mortar

2 slices white country bread, about 1/2-inch thick, toasted until dark (but not burned!)

1/4 cup verjus (or mild vinegar, such as rice vinegar)

1/8 teaspoon of grains of paradise (optional, use white or black pepper as a substitute)

1 cup red wine (you might wish to use a sweet red wine, due to all the acid in the dish, but you could add 1 teaspoon of sugar or honey to the wine to cut the dryness)

First, sauté the liver in a tablespoon of lard in a small skillet or pan until well browned on all sides. Add a few tablespoons of the chicken stock and cook until liver is no longer pink inside. Set aside, retaining the stock.

Turn on the broiler of your oven and brown the bread on both sides until quite dark, but not burned. Alternatively, you could do this step on the stove top with a skillet.

Set the oven to BAKE at 350F. Using a cleaver, or large heavy knife, cut the chicken into serving pieces as we do today, then chop the , the breast into four smaller pieces, the legs and thighs into two smaller pieces, and cut the wings into three pieces along the joints. Place the chicken in a heavy pot and pour in the remaining chicken stock. Simmer for 15-20 minutes or until chicken is no longer pink and raw looking on the outside. Remove chicken form stock and place a large platter. Set the stock aside.. Heat the remaining lard in a heavy skillet (one with a lid) and brown over medium-high heat until golden brown in color. Save the lard. Place chicken in oven, with lid ajar.

Make the sauce by first tearing up the bread and placing the pieces in a bowl. Douse the pieces with the rice vinegar and mix in by turning the bread chunks over a few times with your hands.

I confess: I used a food processor for the next step, but you could be “authentic” if you wish and use a large mortar and pestle instead.

Place the liver, cooled stock, and bread in the food processor/mortar. Reduce the ingredients to a paste. Scrape the paste into the skillet with the saved lard. Heat to medium heat and add the remaining ingredients except for the parsley. Reduce heat. Taste for seasoning and add more if necessary. Let simmer about 10 minutes on top of the stove, then place pot, covered, in stove next to the pot with chicken. Bake for another 20 minutes or so. If sauce is too thick, stir in a few tablespoons of chicken stock. When chicken is tender, remove from oven and place a few pieces on a dinner plate. Remove the sauce from the oven and stir in the parsley. Spoon some of the sauce over the chicken. Serves 4-5.

Guess what? I liked it, the liver flavor was not very noticeable, and I enjoyed imagining myself sitting at a long trestle table, eating and raising my cup to the king. Or whomever.

*New edition published in 2015, by University of Liverpool Press.

**Google Translate’s interpretation of the recipe:

well cooked in good boullon, decopez by slugs, then suffris in beautiful healthy bacon; take them out of your capons and grind them up, then take the stingy bread, stuck in good vergus, all past by the estamine, ginger, nail, seed, deffait of red wine and sour wine; do all the brewing together; and persiny; throw over your grain warmly.

Note:  All drawings here are the work of Courtney Nzeribe. For more on wines of the period, take a look at this issue of Medieavalia, about wines in the Middle Ages and the Renaissance, especially “Medieval and Renaissance Wines: Taste, Dietary Theory, and How to Choose the ‘Right’ Wine (14th–16th Centuries)”, by
Allen J. Grieco