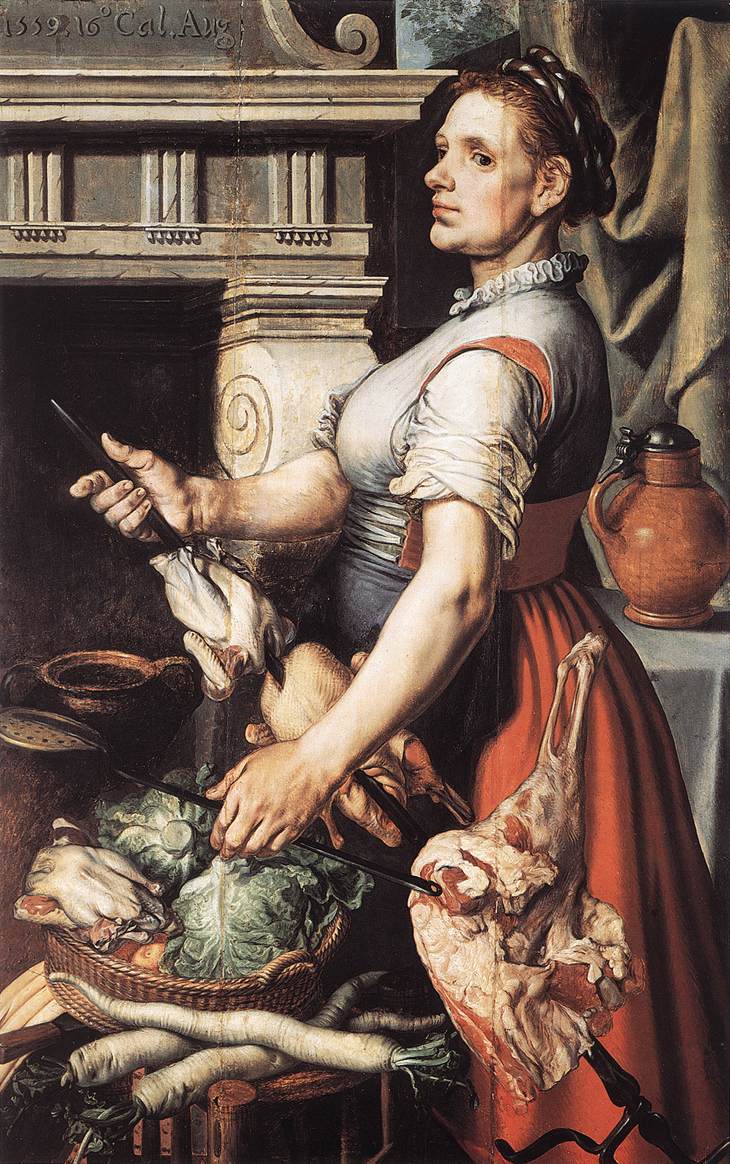 If you scrutinize sixteenth-century Dutch artist Pieter Aertsen’s painting, “The Cook in Front of the Stove,” you will see a rather stereotypical image of servant cooks, one that persisted in popular memory in Europe until well into the nineteenth century. Sean Takats, assistant professor of history at George Mason University and codirector of Zotero, attempts to get beyond that image in his thought-provoking new book, The Expert Cook in Enlightenment France.

Beginning with the premise that much what passes for fact about cooks in eighteenth-century France is in fact somewhat fictitious (“fakelore”!*), Dr. Takats tackles the myths and realities of the cook’s occupation. 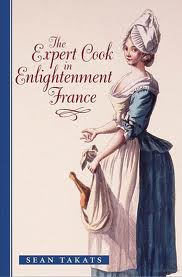 The Expert Cook in Enlightenment France consists of five chapters: Defining the Cook, Corrupting Spaces, Pots and Pans, Theorizing the Kitchen, and The Servant of Medicine. Dr. Takats’s major thesis is two-fold: that cooks “actively participated in the Enlightenment” and that his work offers “a new way of looking at the relationship between labor and gender.”

Note that the stance of the cook on the cover closely resembles that of the woman in Aertsen’s painting.

His book attempts to analyze the process by which cooks became seen as professionals and not just servants.

Like Susan Pinkard in A Revolution in Taste (2009), Dr. Takats identifies the eighteenth century as a time of profound change in French culinary practices, specifically “la cuisine moderne,” which threw off culinary excesses dating from the Middle Ages and adopted the simple and the natural, principles of the Enlightenment.

The major difference between Dr. Takats’s The Expert Cook in Enlightenment France and other books similar to Pinkard’s—Amy Trubek, Haute Cuisine: How the French Invented the Culinary Profession (2000); Priscilla Park Ferguson, Accounting for Taste: The Triumph of French Cuisine (2004); T. Sarah Peterson, Acquired Taste: The French Origins of Modern Cooking (1994), and Rebecca L. Spang, The Invention of the Restaurant (2000)—lies in Dr. Takats’s persistence in looking at the people who actually did the work in the kitchen. As he says, “In recent years, a steady stream of scholarship has continued to flesh out this narrative [of the changes in French cooking based on ingredients and techniques] and little has emerged to challenge it.” He also tosses Barbara K. Wheaton and Philip and Mary Hyman into this disdainful stew of similarities. Oooh.

With a few exceptions like those personages involved in pastry making and catering, cooks never formed guilds or other institutional structures to help them achieve status and acceptance as did other professional occupations. Therefore, records of their activities tend to be restricted.

As Dr. Takats states at the beginning of his narrative, his “sources are diverse, because the study of cooks requires an especially multifaceted approach to evidence.” Those resources included material stemming from the fields of “architecture, consumer culture, and the press, and the history of science and medicine—all situated within the broader context of the Enlightenment.”

Dr. Takats examines these sources closely, including literary works, which emphasized certain ingrained cultural and social attitudes toward the cook’s profession. Eighteenth-century denizens tended to regard cooks— both male and female—as dirty, germ-encrusted beings prone to theft and bad morals and even possibly poisonings. After all, cooks could defraud their masters, poison them, and embarrass them with lewd behavior. Just with a pot, a fire, and a wooden spoon. Imagine that … .

Yet in spite of these negative views, cooks earned fairly high salaries and wielded a tremendous amount power within the household, be it upper class or middling and bourgeois. Cooks even sought to promote their culinary knowledge in medical matters, claiming that they knew the healthy way to eat and thus prevent any number of maladies. In other words, “Understanding the potential power of cooking only made cooks more dangerous, not less.”

Dr. Takats suggests that these cooks took the new modern form of cookery, “la cuisine moderne,” and “aimed at establishing themselves as expert engineers of taste through the fusion of a new theoretical knowledge with existing mechanical skill. Although largely formulated in cookbooks, la cuisine moderne’s most important contribution was not its recipes but rather its new cook: a ‘taste professional. . . .’”

And that story, while not populated with personal details in any depth, emerged from affiches, or advertisements in weekly trade journals, for positions and household accounting records. Based on the documentation, Dr. Takats shows that—contrary to popular belief even today—cooks were surprisingly literate and numerate.

This state of affairs is demonstrated by their accounting skills and access to highly “portable” cookbooks, which cost “around three livres for a single-volume work, about the price of a dozen eggs.” Many cooks spoke more than one language and were thus capable of producing a number of foreign dishes. Most of the period’s cookbooks came from the hands, if not the pens, of servant cooks.

The only quibble I have with The Expert Cook in Enlightenment France lies in Dr. Takats’s theme of cooks borrowing elements of the Enlightenment to further their agenda, that is, finding a respected place in society and professionalization of their trade. The tie to that philosophical movement seems weaker than it should be. A brief chapter on the key elements and thinkers of the Enlightenment would enrich this highly fascinating, but relatively short, book.

Although The Expert Cook in Enlightenment France covers a time period far removed from our own, the eighteenth-century trend toward simple and more natural food reflects our own time in many ways.

The Expert Cook in Enlightenment France will interest scholars and lay people alike, those with a passion for the history of cuisine, especially the labor and other tasks that went into the preparation of food and the creation of a profession.

Other secondary sources about cooks and chefs in France include the following:

*First used in 1949, by R. M. Dorson in Jrnl. Amer. Folklore 62: 201.  “The deliberately contrived product is not folklore but what I have elsewhere called fakelore. Fakelore casts a warm, nostalgic glow over the folk; it grins coyly at their fun, and drips tears over their tragedies.”