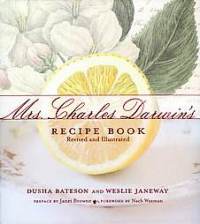 Nearly everyone on the planet, or at least those with access to education — unfortunately many areas of the world and even this country lack miserably in the teaching of the young — will know the name of Charles Darwin, as the blurb below allows. Now, maybe  some people don’t buy into the theory of evolution,  but the fact of the matter is that the issue is here to stay. And perhaps convince and persuade doubters as more and more evidence scrambles from the earth, coating the picks and trowels and shovels of archaeologists and other scientists, proponents of empirical method, not satisfied with just mere belief.

Like all living creatures, Charles Darwin ate. Unlike most men, Darwin had a wife who recorded what she fed his physical body, housing as it did the mind that struck humans off their pedestal and mired them in the mud with the rest of earth’s creatures. 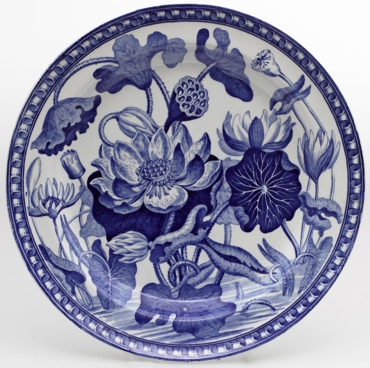 Emma Darwin no doubt set a distinctive table, being related as she was to the Wedgwoods of the porcelain china fame. Emma and Charles Darwin, first cousins, eventually had ten children, even though she was 30 when they married. Although the Darwins came from the non-noble class, they seemed not to lack for money and servants did most of the household labor, including the cooking. Emma wrote her cookbook, true, but she probably cooked very little on a day-to-day basis. (You may view the actual pages of the cookbook online.) The Darwins used the Wedgwood  “Water Lily” china pattern in their household.

Nevertheless, her hand rests on each page of this gorgeously illustrated book. As Nach Waxman, owner of the famous New York bookshop, Kitchen Arts and Letters, says in the forward to this book, ” … all help define the world in which Darwin lived and worked and thus enrich our understanding of his life and his accomplishments.”

The BEEF COLLOPS probably helped. Here’s the recipe as  Emma so charmingly wrote it herself:

Cut thin slices from the rump or rib. Spread them on a table, season with, black pepper and salt —Dash each side with flour, have ready some butter in the frying pan, boiling but not browned, put in the collops, fry them on each side a light brown, take then out of the pan without any of the butter that is left, and put them into a stew pan with some good beef gravy, plenty of sliced onion, some soy and walnut pickle, let all stew gently till the collops are quite tender and the sauce a proper thickness — This dish requires to be served up very hot. — N.B. The onions should be baked a little while before they are sliced.

From the back cover:

“Almost no name is better recognized around the world than that of Charles Darwin, the man who changed our view of how life came to be. His wife Emma Wedgwood Darwin kept a fascinating ‘recipe book’ and its presentation to the general public for the first time marks a major publishing event. Replete with photographs, tested recipes, and anecdotal and botanical information, this book is sure to transport every reader—from cooks and botanists to historians and students of culture—to one of history’s most admired eras.”