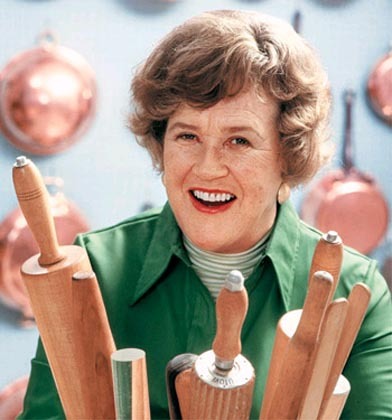 (Julia Child died on August 13, 2004. Her birthday was August 15; she would have been 92 years old. The following article originally appeared in The Roanoke Times on Sunday, Aug. 22, 2004, page 3 of the Horizon section. I wrote this with tears in my eyes, I’d only met her once. And yet, what an impact this news, that I could no longer expect a cookbook, a TV show, or a conference appearance.)

“Julia Child dies at 91.” I still miss this woman. She inspired me no end. And I remember the date well.

Stunned at the breaking news, I read the flickering words on my computer screen one more time, tears slowly welling up in my eyes.

Why should I be crying for Julia Child?

I only met her once, spending a half an hour with her alone in an art gallery in Winston-Salem, North Carolina in 1997. She presented a keynote address at that year’s national conference of the American Society of Indexers. Basically, although at the time I indexed books professionally,  I was there as a fan, because cooking is like breathing to me. When the president of the Society asked me to squire Julia around before the keynote address, I almost refused for fear of messing up. What on earth would we talk about?

As it turned out, I shouldn’t have worried. We had a lot to talk about, and Julia put me, a complete stranger, at ease right away.

After the elaborate banquet prepared for the conference attendees, Julia insisted on calling out the entire kitchen staff for a standing ovation and a hug for the young nervous chef. Who wouldn’t be sweating with fright at the idea of cooking for the great Julia Child?

Later, after Julia’s wry keynote address, I opened copies of her books for her book signing that followed. You see, she would only sign the books on a certain page and in a certain place. Having read and cooked from most of her cookbooks, I wasn’t surprised at this unwavering attention to detail. Over 250 indexers and others  lined up with copies of her books. Julia signed every one of those books, smiling, laughing, asking people about themselves. Her glowing face, so full of energy from interacting with the scores of people in the room, is something I have never forgotten. That was Julia, a real person, giving, caring, and meticulous. The Julia we read about as her long-term and close friends and colleagues continue to pay tribute to her.

But I am not mourning her death just because I just happened to meet her once, a picture of us together on a wall in my kitchen as proof. Rather, my sorrow comes from knowing that, with Julia’s death, America lost a strong voice of hope and optimism. Her wise comments in her book, The Way to Cook, sum up her feelings about food and human community:

Dining with one’s friends and beloved family is certainly one of life’s primal and most innocent delights, one that is both soul-satisfying and eternal.

For Julia, true hospitality meant welcoming the stranger. Julia’s way is a way to remember our shared humanity with all human beings in these very troubled times. Eating, cooking, and sharing food together are all things that we all need very much these days when even families, much less strangers, do not eat meals together very often.

In memory of Julia, invite a new acquaintance to a meal this week. Cook the food yourself. And remember that once people have eaten together, there are no longer strangers. 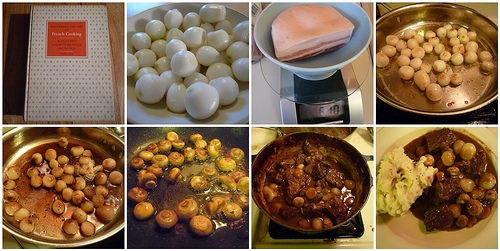 Appetite for Life, by Noah Riley Fitch (1999)
As Always, Julia: The Letters of Julia Child and Avis DeVoto, by Joan Reardon (December 1, 2010)

Backstage with Julia: My Years with Julia Child, by Nancy Verde Barr (2008)

Julie and Julia: My Year of Cooking Dangerously, by Julie Powell (2005, paperback 2009)

My Life in France, by Julia Child and Alex Prud’homme (2006)