Patron Saint of Mexico and the Americas

Mexican novelist Carlos Fuentes once said that “…one may no longer consider himself a Christian, but you cannot truly be considered a Mexican unless you believe in the Virgin of Guadalupe.” 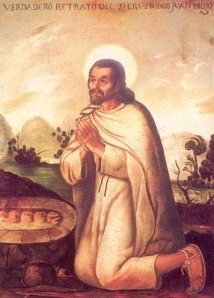 Apocryphal or not, the story of the Virgin of Guadalupe makes fascinating reading. And the food’s pretty good, too, like most feast-day food tends to be.

But first a little history.

An Aztec convert, Saint Juan Diego Cuauhtlatoatzin*, first saw the Virgin of Guadalupe on December 9, 1531. On his way to Mass that morning, crossing Tepeyac Hill near what is now Mexico City, Juan Diego was suddenly blinded by brilliant light pulsating in the air. The Virgin told him that she was the Virgin Mary, the mother of Jesus Christ. She appeared to Juan Diego over a three-day period from December 9, 1531 through December 12, 1531. It was her wish that a church be built on Tepeyac Hill and she instructed Juan Diego to tell the news to the bishop, Juan de Zumárraga.

The trembling Juan Diego sought an audience with the prelate and it was not easy, because of Juan’s social status. But finally the bishop consented to see him. Upon hearing Juan Diego’s story, the bishop demanded proof of the apparition of the Virgin.

For many days, Juan Diego avoided Tepeyac Hill, but one day he crossed it again, and again the Virgin appeared. She told Juan Diego to pick the roses that were growing unseasonably on top of the barren hill and to take them to the unbelieving bishop. Juan Diego wrapped the roses in his cape and hastened to the bishop’s residence. When Juan Diego unfurled his cape in the bishop’s presence, there was an image of the Virgin imprinted on the cape as well. That was all the proof the bishop needed: soon a small church was built on the site on Tepeyac Hill in honor of the Virgin.

Today the Basilica of the Virgin of Guadalupe in Mexico City is one of the most visited sacred sites in the Americas.  A new, modern shrine now houses Juan Diego’s cape,  still on display.  No one has been able to prove that the image of the Virgin originated in anything but an authentic apparition. 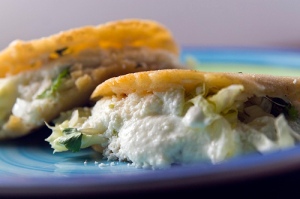 Some of the traditional street foods sold and served at the Basilica on the Virgin’s feast day include Chocolate Atole;  Tacos with Nopales, Potatoes, Cheese, and Chiles; and gorditas (little fat ones).  Mexicans also celebrate the holiday with traditional dishes like tamales, buñuelos, and the traditional Christmas codfish  dish, bacalao.

Gorditas and the Virgin’s feast day struck up an interesting relationship. And therein lies a short story. 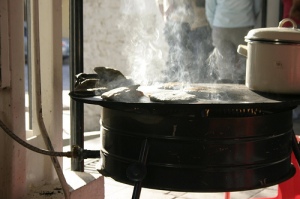 In 1896, the year after dictator Porfirio Diaz named the Virgin the patron saint of Mexico, Vicenta Torres de Rubio, an adherent of indigenista cooking and author of the serialized Cocina Michoacana, published a recipe for gorditas, little flat cakes of corn masa. These gorditas soon became associated with the festivities surrounding the Virgin. To this day women sell these little cakes wrapped in tissue paper, along the pilgrimage route to the shrine.

Add 1 ¾ cup water to a blender or food processor, pour in the masa mixture, and blend until smooth. Pour mixture into a medium-size saucepan.

Add milk, chocolate, sugar, and aniseed to the masa mixture in the saucepan. Over medium heat, bring the mixture to a simmer, stirring constantly with a wooden spoon, turn heat to low, and stir until chocolate and sugar are dissolved. Strain through a fine sieve, if desired, and serve immediately in mugs.

*Piloncillo is a cone-shaped hard brown sugar that is made from boiling down sugar cane. It is sold in 1-oz. cones in Hispanic food markets.

BOOKS ABOUT THE VIRGIN OF GUADALUPE (and Mexican food):

The Essential Cuisines of Mexico, by Diana Kennedy (paperback, reissue, 2009)

The Lady of Guadalupe, by Tomie dePaola (no recipes, children’s book) (1980)

Mexican Phoenix: Our Lady of Guadalupe: Image and Tradition across Five Centuries, by D. A. Brading (2003)