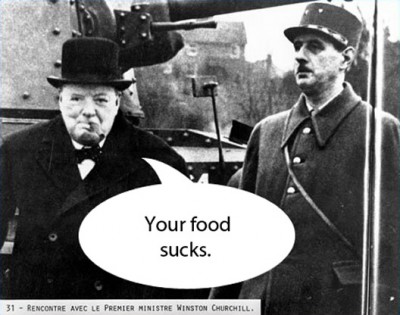 The recent inscribing of  “intangible cultural heritage” status  to “the French gastronomic meal” by UNESCO brought both cheers and jeers to the table.

As I wash my hands and get out my Le Creuset terrine baker for the paté de campagne en croûte for Thanksgiving appetizers, I’d like to share a quote with all of you about French cuisine, at least as it exists in the incarnation rewarded with the UNESCO designation:

Although it may be commonly agreed, and not by the French alone, that gastronomy is somehow “innately”‘ French, only in the nineteenth century, however important the ancien régime contribution, can one identify anything resembling a national culinary discourse. Of course, assigning gastronomy to the French “character” or unique geography or exceptional climate  begs the question, all the more so since most of the institutions, ideologies, and practices that express these character traits originated, again, only in the nineteenth century.  … In fixing these culinary practices in a circumscribed space, the gastronomic field allows us to distinguish between what is distinctively French and what is more generally modern about these culinary practices, what French cuisine and French culinary practices share with other cuisines as well as the elements that set French foodways apart. [Priscilla Parkhurst Ferguson, “A Cultural Field in the Making: Gastronomy in Nineteenth-Century France.” In Lawrence R. Schehr and Allen S. Weiss, eds. French Food: One the Table, On the Page, and in French Culture (2001).]

To my way of thinking, this quote points out that, in some ways, the UNESCO award is simply business as usual for France. They will now have a bit more money to put into programs similar to the ones they now operate, as well as new ones. The French have been aware for some time that their cuisine and the products that go into face some serious challenges, not unlike those faced by other developed nations. Changes in agricultural practices and consumer tastes affect cuisines all over the world. So too the immense immigration patterns, particularly in the case of France, where French citizens now hail from the far-flung borders of France’s former colonial empire.

True or not, many people, including the British, find French snobbery about their cuisine a bit off-putting. But as Jean-Robert Pitte, author of French Gastronomy and one of the most enthusiastic supporters of the UNESCO designation says,

“This is not about trying to conserve the recipe of blanquette de veau or boeuf bourguignon,” nor is it “an affirmation of superiority,” he says. “Every country in the world has dishes of quality and identity that people gather around and share. But there is a French way to prepare a gastronomic meal, with a succession of dishes and association of food and wines, that is specifically French.”

Fads come and go, sometimes cooking methods go out of style (think American casseroles and, yes, some fancy French concoctions that can only be prepared by hordes of commis and other slaveys working in hot vast kitchens), but I still hold that preserving a part of French culture that impacted the world so strongly is not a bad thing. As Pitte muses, “What’s threatened is the joy of living we get through what we eat and drink.”

And THAT’s what’s evolving everywhere, or so it seems. All the focus on eating healthy, worrying about antibiotics in the Thanksgiving turkey (which you might eat only once a year), excessive concern over organic foods, all this detracts from the very thing that food does for us as humans: it nourishes us and brings us  into community with others. Or at least I hope it does.

And that, for me, is the very important message conveyed by  UNESCO ‘s recognition of “the French gastronomic meal” (what a mouthful!). It’s not a question of nationalism, competition within communities or between cooks, it’s about forming community. And as much as people might rail and wail, the French ideal of the family meal, while not unique by any means since other cultures enjoy the same thing, presents us with an aide memoire of what we could lose if we don’t watch out.

Gather together some fresh crusty bread, soften up some unsalted butter, and wash and trim lots of red radishes. Pull up your chair and pour some wine. Put some butter on the bread, sprinkle on some coarse sea salt, and top it with a radish. Eat.