Happy/Merry Christmas/Hannukah/Holiday Season/Winter Solstice and a wonderful, hope-filled New Year. A big “Thank You” to each and every one of you for reading “Gherkins & Tomatoes.”

Seven years before the sonorous words of the American Declaration of Independence rang out in Philadelphia, George Washington ate the following Christmas brunch. Betty, the only sister of his who survived to adulthood, served a very English-American menu:

Recipes for Flummery appear in Scottish manuscript cookbooks dating to the fifteenth century. Here’s one to try, that might be close to the one Betty served. Martha Washington did not include a recipe in her manuscript cookbook, annotated and interpreted by Karen Hess. 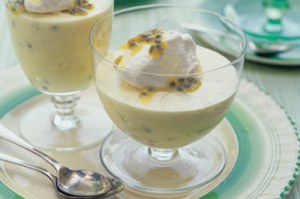 Stir the soaked oatmeal and then strain off the liquid into a saucepan. Discard the oatmeal.

Add the orange juice and sugar to the liquid, bring to the boil and boil, stirring continuously, for about 10 minutes, or until the mixture is very thick. Allow to cool until tepid and then stir in the double cream.

When ready to serve, sprinkle with grated orange rind, pour the honey over the flummery, then the whisky or brandy. Top with whipped cream.

An old recipe from Powys, UK:

Take one ounce and a quarter of Isinglass dissolved over the fire in a quarter of a pint of Water, then take a pint of Cream, and a pint of Milk, a grated Nutmeg and a few blades of Mace, half the rind of a Lemon peeled very thin sweeten it with Sugar to your taste, let them boil all-together five minutes, then strain it thro a fine cloth or sieve, let it stand to be near cold, before you fill your moulds or glasses.