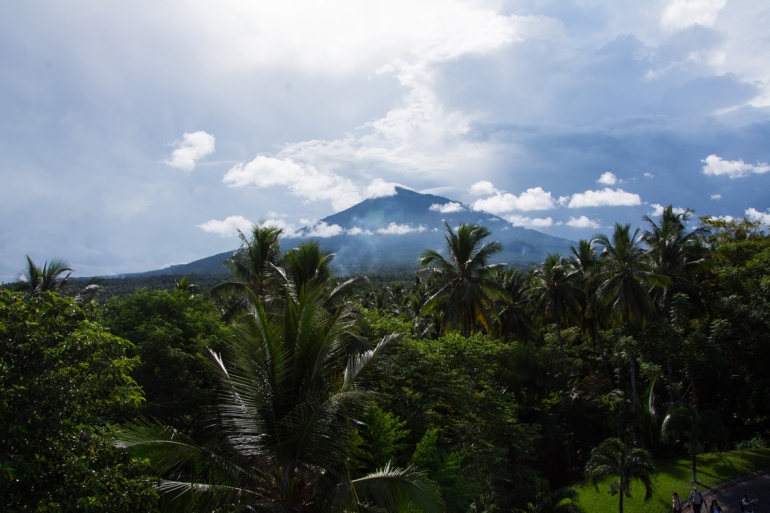 At the fish market, the man in black hoisted a bucket of fish to his well-muscled shoulders and strained to keep from slipping on the algae-covered steps. Picking his way out of the churning water, he plunked the bucket down and grabbed three squirming sardines, their scales glinting silver in the early morning sun, as partial payment for his work. He set them carefully next to his flipflops. And I quickly pressed the shutter on my camera and captured the moment, a tangible and symbolic memory of the week I spent as a gastronomic/culinary tourist in the legendary Spice Islands, one of the most remote areas of the world.

There’s an old adage that says that your first view of a new place colors everything thereafter. If that is true, then the verdant volcanoes remain one of my most vivid memories of Manado, Indonesia.  Looming up underneath the airplane as it swung left and headed for earth, their green velvet crests sparkling like emeralds in the bright noon-day sun, the Mt. Klabat and Mt. Lokon volcanoes cradle this chaotic city, traditional and modern at the same time, like two hands raised in namaste to the sky.

Known world-wide primarily for its superb deep-sea diving and snorkeling, Manado is a city in predominantly Christian North Sulawesi, on Sulawesi (formerly Celebes), one of the furthest east islands of the immense Indonesia archipelago, which consists of 17,508 islands. Just to put some perspective on the distances involved, Manado lies 1350 miles east of Jakarta (formerly Batavia), capital of Indonesia, situated on the island of Java. The Dutch colonized Indonesia and ruled for close to 350 years, beginning in 1619. They introduced a number of cool-weather crops like cabbage and carrots, as well as baking traditions still visible, such as doughnuts, cookies, and cakes like the coconut-imbued Klappertart. And in 1859, the British naturalist Alfred Russel Wallace spent several weeks in the area, as he solidified his theories about evolution, resulting in what is called the Wallace Line, a hypothetical boundary between Asian and Australian fauna.

Through the recommendation of an Indonesian Facebook acquaintance in the Oxford Symposium on Food & Cookery group, I arranged for Mr. Marlon Kamagi to squire me around to various culinary sites, including “wet” markets like the “extreme market” in Tomohon, where vendors sell dozens of varieties of dried fish, as well as dog meat, fruit bats, and jungle rats. Mr. Kamagi, associated with Al Gore’s Climate Reality Project in Indonesia, spends a lot of his time working with farmers and cooperatives in North Sulawesi, encouraging the production of traditional food products such dodol – a coconut toffee-like confection – and palm sugar. We agreed to a packed schedule, filled with excursions to markets and home-based food industries, too. As a Baby Boomer, and female of a certain âge, I can’t enough recommend the thrill of doing your own thing, of creating your own adventures.

After driving along narrow, traffic-congested roads for an hour on the first day, we stopped in front of a small modern house built of cinder blocks, a dodol factory. The owner of this 25-year-old home-based business, Mrs. Polin Tanod, led us to a small, smoke-filled room in the back, where a wiry man of approximately forty stood, squeezing coconut milk into a wide flat aluminum pan, first wrapping the grated coconut into a damp cloth. He slowly added rice, ground to a powder with a special machine. Then came the most demanding part of the procedure – he stirred it all over a charcoal fire until it rendered into a dark brown paste almost the color of Brer Rabbit molasses. Once the consistency looked right, he spread it onto a flat surface to cool and Mrs. Polin Tanod carried a pan of it out to the patio, where her children sat, ready to fill fresh palm leaves with the concoction after they roll it in roasted peanuts. The candy tastes a bit like a Tootsie Roll and the family sells it in the local market, Airmadidi.

The next day, at the end of a rutted and muddy road, another treat awaited. Palm sugar, which appears in many Indonesian recipes and helps to counteract the

saltiness of the ubiquitous trassi (shrimp paste) added to many recipes. Mr. Pandey Sibi had just finished cooking up a batch of palm sugar in the breezeway of his cinderblock house, where his son played on the Internet, and began ladling the caramel-flavored sugar into coconut shells, giving the sugar its distinctive shape. While the boiling hot sugar cooled on a large iron rack, Mr. Sibi demonstrated his method of gathering palm flowers for making the sugar, by climbing up a wide bamboo ladder using his big toes to steady himself. Mrs. Sibi squatted near the still-red hot earth oven and began removing sugar from the molds, plucking off the fresh nutmeg leaves used to block holes in the coconut shells.

I carried the still-warm sugar back to the hotel and dribbled some of it into my coffee the following morning, preparing for my session with the Sintesa Peninsula Hotel’s chef, Ahmad Rofiq. Chef Rofiq and his staff prepared Nasi Goreng (Indonesian Fried Rice), Satay (grilled meat with peanut sauce), Braised Ox Tails, and a delicious Soto, or soup, highly seasoned with the warming flavor of ginger. Sambals, similar to salsas, always turn up on the table, for diners to liven up their food should they wish to do so. Except for the oxtails, most of these dishes, more traditional on the island of Java than on Sulawesi, lacked the local “rica-rica” treatment, the fiery red pepper paste so common in the Manado area. North Sulawesi enjoys the reputation throughout Indonesia of serving the hottest food in Indonesia. Chef Rofiq, like many Indonesian chefs, worked on cruise ships around the world after attending culinary school in Europe.

Like dessert, the most beautiful thing came last. Manado’s fish market at first appeared rough and slimy, with the early morning light accentuating dark shadows. But then, as the sun rose slightly higher and the hands on my watch inched toward 6, the rainbow colors of the fish sparkled as sunlight hit the scales of fish that had been swimming in sea water only an hour or so earlier. I longed for a skillet, and some good strong Tuscan olive oil, to pay homage to the stunning creatures laid out on white tiled counters and plastic buckets. The boats kept coming in, bringing colorful plastic buckets filled to the brim with writhing fish, and men with muscles like cords of wood walked into the dark water, like the man in black, and hauled the day’s catch to shore, where vendors took their share and paid in kind, plus a scrap or two of paper money.

Another day, in a place rich in history and culinary wonders, a place where sea and land sustain life, in spite of it all.

Cynthia D. Bertelsen of Blacksburg is the author of Mushroom: A Global History (Reaktion Books, 2013) and the culinary history blog, “Gherkins & Tomatoes” (http://gherkinstomatoes.com), as well as a number of articles on culinary topics.

Culinary tourism officially began in 2001 with a paper by Erik Wolf, followed in 2006 with his Culinary Tourism: The Hidden Harvest (2006), a founder of the World Food Travel Association (http://www.worldfoodtravel.org/). Defined as “the pursuit of unique and memorable eating and drinking experiences,” culinary tourism aims to acquaint travelers with authentic, local foods and cooking.

For more international culinary tourism opportunities, do a Google search with “culinary tours” + the country or region you are interested in.

SILK Air out of Singapore

Forbes, Anna. Insulinde: Experience of a Naturalist’s Wife in the Eastern Archipelago (1887)

Oseland, James. Cradle of Flavor: Home Cooking from the Spice Islands of Indonesia, Malaysia, and Singapore (2006)

Peterson, Joan and David. Eat Smart in Indonesia: How to Decipher the Menu, Know the Market Foods, & Embark on a Tasting Adventure (1997)

Trassi: Dutch version of terasi, the Indonesia word for shrimp paste, used in many culinary preparations

Cynthia D. Bertelsen of Blacksburg is the author of Mushroom: A Global History (Reaktion Books, 2013) and the culinary history blog, “Gherkins & Tomatoes” (http://gherkinstomatoes.com), as well as a number of articles on culinary topics.

What I see on my daily walks.
Couscous with kefta in tomato sauce.
Day 30 of social distancing. Dreaming and Wishing - gherkinstomatoes.com/2020/04/14/dreaming-and-wishing-being-in-a-state-of-siege-coronavirus-covid-19-day-30
Big batch of sofrito getting done.