Speaking as the beneficiary of an immense system of food production in the twenty-first century, as the citizen of an increasingly obese nation where over two-thirds of my fellow citizens are considered overweight,  I can only imagine food shortages in one way: through the seasonal deprivations that occurred when I lived in West Africa. When I read of French women trying to find food for their families during the height of rationing during World War II, I recall trying to find enough tomatoes to feed guests coming for dinner on a hot, dry evening in Burkina Faso (formerly the French colony of Haute Volta). Short of magic, or sudden wealth, I could find no more than six, no matter how many market streets I touched on.

And so, like many French women in the past, I simply went without.

Not the same at all, you’re right, really, but still the memory sticks with me and makes it a little easier to comprehend the enormity of what cooks faced as they navigated the rationing system and the black markets that bloomed as the years of war continued on and on.

Rationing was meant to ensure supplies, and not necessarily to reduce consumption. But that’s not how it turned out; sometimes people simply couldn’t use up all their rationing coupons in a month because they simply couldn’t find the food to buy with the coupons, much as I found no tomatoes.

During the war, scarcity happened for a number of reasons, aside from seasonality:

And so people turned to the black market if they could. Producers faced stiff fines or worse if the authorities caught them holding back food for sale in any manner other than the official channels. 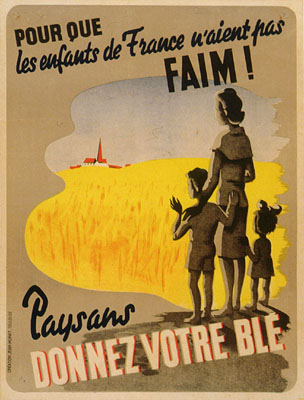 Looking at the following chart, it is quite easy to understand why people attempted to sell goods on the black market:

Given the prominence of food in French national identity, how did people come to grips with the sudden change in their eating habits? Called le système D, or débrouillage (resourcefulness), the change encouraged the French to form new networks that they might not have ever attempted prior to the war, for social and class reasons. People with money generally fared better than those without, but people with ties to the countryside survived well, too, even without money, because their country cousins often sent them food packages.

Take Georges Mazeaud for instance, a Parisian glovemaker,who turned 61 the first year of the German occupation. His cousin,  Gaston Grenouiilleau – whom he never met – lived in Georges’s natal village of Concourson-sur-Layon near Samur, Georges wrote to Gaston, begging him to send food, three kilos as permitted by law at the time: “Bacon, cheese, butter, pasta, in fact anything that you can eat.” Georges had so many mouths to feed – wife, children, grandchildren – and complained to Gaston about paying eighty francs for a chicken more bones than meat. Gaston replied with packages containing rillettes that reminded Georges of his aunt Léontine and a joint of lamb. But Georges tried hard to reciprocate over the years and fashioned gloves for his cousin and his cousin’s family and friends.**

Of course, the Nazis cracked down hard on people who tried to operate outside of the regular channels, making it even more difficult for people to obtain food because purveyors obviously preferred to deal with people they knew. 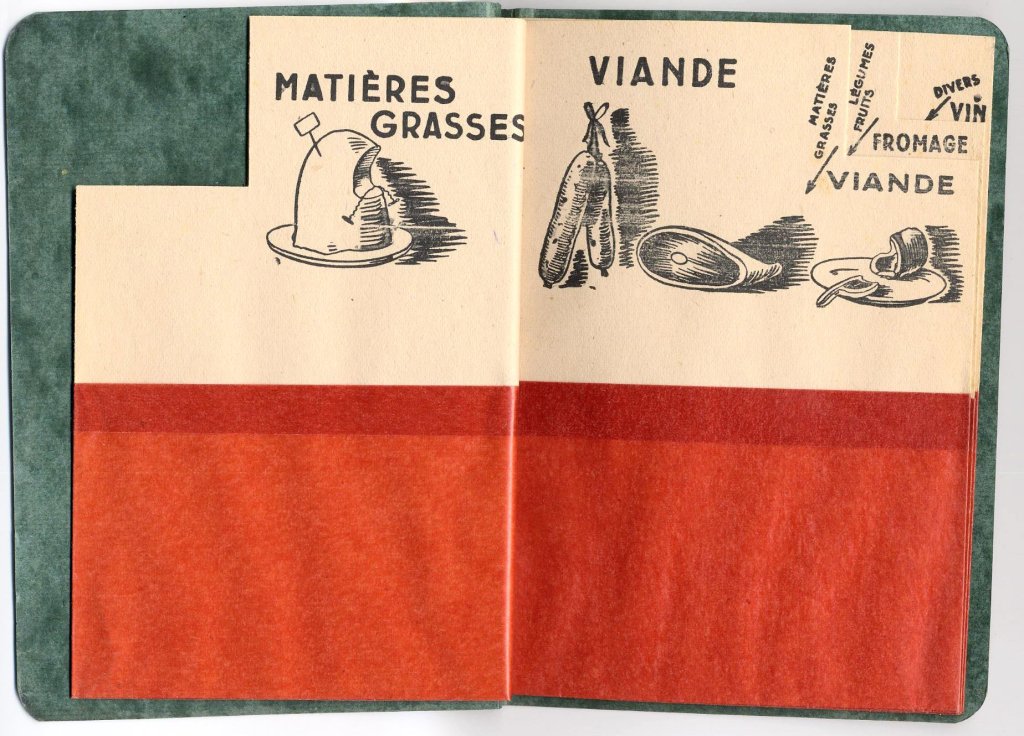 One interesting culinary-related fact about the German occupation of France and the French experience versus that of the British and the Americans is that there seemed to be few cookbooks published about how to make good-tasting food out of scraps and scrapings. I’m asking myself if somehow part of that difference might be related to to the fact the French were actually occupied, while the British and the Americans remained free of an outside, occupying force. More on this later, hopefully.

See the following for more on the black market in France during World War II: