Tell me what you eat, and I shall tell you what you are.
~~ Jean Anthelme Brillat-Savarin ~~

As Alice Arndt said in Culinary Biographies, “The names of the most famous cooks of their day, the most influential writers and thinkers, the most fashionable restaurateurs, often bring blank looks when mentioned today.”  Just the other day, Jeanette Ferrary commented on the ASFS listserv that many young food writers today do not know about M. F. K. Fisher .

And yet today few people who do know of her remember that M. F. K. Fisher translated French lawyer and philosopher Jean Anthelme Brillat-Savarin’s The Physiology of Taste (1825),*  one of gastronomy’s erudite classics.

Brillat-Savarin’s  chapter on the “Philosophical History of Cooking” offers much cud for the chewing. He attempted to explain cookery in terms of ancient man, fire, and the grilling of meat. This seems only apropos for a man born in a town called Belley!

He began by pointing out that humankind may well have been frugivorous (fruit-eating), not unlike their primate cousins. But unlike primates, who make tools without a thought for future use, striking a stone to accomplish a task just of the moment, humans developed tools for constant use. As the philosopher said,

… the very realization of his weakness led him to find ways of making weapons, toward which he was also pushed by the carnivorous yearnings already revealed by his canine teeth. Once armed, he made of all the creatures who surrounded him his prey and his nourishment.

And fire stood at the top of the list of those weapons.

Once fire was recognized, man’s instinct for self-improvement led him to subject meat to it, at first to dry out the flesh and finally to place it upon the embers to cook.

Meat thus treated was found to taste much better; it takes on more firmness, is chewed much more easily, and its osmazome as it browns becomes savorous and gives the flesh an aroma which has never ceased to tempt us.

Brillat-Savarin says this about early humans’ stomachs and their plant-based diets:

It is not surprising that man from the beginning wanted to feed upon flesh: his stomach is too little and fruits have too few nourishing substances in them to be able to replenish sufficiently his bodily losses. He would have done better to live upon vegetables, but this diet demands culinary skills which did not develop for many centuries.

Some bloggers, like Foodvox, picked up the story because in The Economist story, Wrangham offers an especially interesting idea: the one act that separates humans from all other animals is not the possession of a soul, but rather of culinary skills. Wrangham should know, because he serves as a biological anthropologist at Harvard University, a fancy name for studying chimpanzees.

However, Wrangham’s idea appears more complicated than just the cooking angle. In an interview published in the December 19, 2007 issue of the Scientific American, Wrangham proposes the theory covered in The Economist:  Humankind developed bigger brains because of the impact that cooking has on digestion and food absorption. Like Brillat-Savarin, Wrangham doubts that humans could thrive on the fruits and other foods available to modern-day chimpanzees.

The typical fruit is very unpleasant, very fibrous, quite bitter; the net effect is that you would not want to eat more than two or three of them before running for a big glass of water and saying, “That was not a pleasant experiment, I hope I don’t get sick.” They’re not nice to eat. Not a tremendous amount of sugar in them. So there were very few fruits that I’ve tasted that I can actually imagine getting a stomach for because most of them are unpleasant to eat. Some make your stomach heave.

Reading this, I don’t know about you, but the first question that came to my mind is, “Well, you live in Boston and teach at Harvard. Of course you’re not going to be wild about the chimps’ diet!” 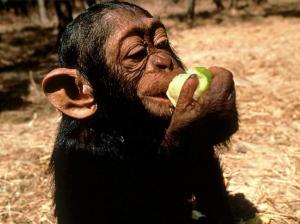 Wrangham anticipated this and said in response to Gorman’s question,

I recognize that I’ve got a palate softened by ease, and it may well be that if you’re hungry in the bush you might be prepared to eat a lot of these nasty tasting things, but I’ve worked with Pygmies in eastern Congo in a forest where I knew a fair number of fruits were being eaten by chimps, and I would ask them, and they’d say there’s no way I would ever eat this stuff. Chimpanzees eat, on average, 60 percent of their food as fruit. Humans couldn’t do that. So one of the fascinating things for me as I ventured into this was really learning about what hunters and gatherers eat-and it turns out that there are no records of people having a large amount of their food come from raw food. Everywhere, everyone expects a cooked meal every evening.

Bigger brains and smaller guts because of cooking? That’s the idea. And it’s plausible; it could be right.

And if Wrangham’s theory is true, cooking transformed everything. Physically, socially, culturally, artistically.

Cooked food led to civilization, in other words.

*Note: The link to the full text of Brillat-Savarin’s book leads to another translation freely available on Google Books.

For more on chimpanzee vs. human diets, see “You are What You Eat: Some Differences Between Humans and Chimpanzees Traced to Diet.”