Of all the nurslings of the sea, mullets have the most gentle and just disposition, harming neither each other nor any other creatures, never staining their lips with blood but…always feeding on the green seaweed.

Silvery jumping mullet cause otherwise staid fishermen to jump for joy, especially now since fall passed us by and winter now flails us. After all, cooler weather means fatter mullet.  And  do Southerners ever love fat, firm‑fleshed mullet found all along the Gulf of Mexico’s coastal bayous.  Surprisingly, this savory vegetarian fish is still relatively unknown to most of the culinary world except in the American South and in parts of Europe.

Europeans have fished for mullet since the time of the ancient Greeks.  And the Greeks perfected the art of mullet fishing: placing a plump captive female mullet in a net as bait, those ancient fishermen thus lured male mullet to their deaths. A siren call if there ever was one!

Called mugil by the Romans, the grey or striped mullet of today, or Mugil cephalus, is netted in warm waters nearly all over the world.  In addition to the striped mullet of the Gulf coasts of the American South, the leaner silver mullet frequents the Atlantic coast of Florida.  The true mullet family boasts a membership of 70‑100 members.  As in any large prestigious family, sometimes undeserving impostors take the name “Mullet”.  For example, the red mullet, or rouget, found primarily in the Mediterranean and at times in the Caribbean, is actually a goatfish and not a mullet at all.

One other thing must be set straight. The French call the mullet le cochon de mer or “the pig of the sea.”  And many other people believe the mullet is a pig‑like scavenger. But the mullet is not a “sucker” in the truest sense of the word. It selectively eats certain microscopic plant and animal matter from the top layer of sediment on the ocean floor. Discriminating mullet “foodies” will eat other foods as well. Some fishermen claim to hook mullet with tantalizing pieces of bread, macaroni, and even pieces of worm. The mullet’s gizzard‑like stomach, similar to that of a chicken, digests this food. These gizzards are often a highly‑prized delicacy, served steamed and doused with plenty of lemon juice, a just reward for the hard‑working fisherman’s family.

Even Marjorie Kinnan Rawlings, author of The Yearling, included a recipe for Boiled Mullet in her bestselling cookbook, Cross Creek Cookery (1942):

Wrap whole mullet in a thin cloth. Lower into boiling slated water and simmer for twenty minutes. Turn out on hot platter and cover with sauce made of two tablespoons butter, two tablespoons flour, one and one-half cups hot water, the juice of one lemon, salt and pepper to taste.

But there is still more. Not only does the mullet provide tasty gizzards and firm white fillets. This amazing fish renders up one more taste treat: its roe.

Mullet roe, admittedly not in great demand in the American market, commands high prices in other countries, especially Taiwan and Japan, where fresh roe often sells for $200 pound. Japanese consumers demand a form of the roe known as karasumi. Different types of dried mullet roe are also popular in Provence in the south of France. There, aficionados call it boutargue, and in Italy bottarga , a sausage‑like appetizer served on toast and sprinkled with lemon juice. Or grated into various dishes. In the American South, fishermen roll the roe in cornmeal and fry it in bacon grease or oil.

While mullet roe and gizzards may not be to your liking, scores of other mullet recipes vie for attention. Deep‑fried mullet is still everyone’s favorite, but the great thing about this fatty fish is that you can fix it in so many different ways: broiled, poached, sauced, grilled, baked, pan‑fried, and smoked. Fresh mullet is best, but if you have to freeze it, cut off the fillets and remove the dark flesh. High in fatty material and heme pigments, this dark flesh does not store well for long periods of time.

So, tonight, as you bite into your mullet dinner, remember that you know a culinary secret that even some prominent Americans chefs don’t know:  Mullet tastes good, darn good.

Soften gelatin in water in small saucepan. Let rest 5 minutes. Cook, stirring constantly, over low heat until gelatin is dissolved. (If gelatin solidifies before you make the fish/shrimp layer, add 2 T. water to the gelatin and stir it gently over low heat.)

Line an 8x4x2‑inch loaf pan with plastic wrap. Arrange the reserved cucumber slices attractively in the pan. To make cucumber layer: beat 3‑oz. cream cheese, vinaigrette mixture, and vinegar with electric mixer. Stir in cucumber and HALF of the gelatin and HALF of the parsley. Pour mixture into loaf pan, spread evenly. Chill until nearly firm (about 1 hour).

Fish/shrimp layer:  mix 6‑oz. cream cheese, mullet, mayonnaise, lemon juice, seasonings, horseradish sauce, and Tabasco. Stir in the remaining gelatin and parsley. Spread half of this mixture over the first layer in the loaf pan. Line the top with half of the sliced shrimp, pink sides down. Repeat with the remaining mixture and shrimp. Chill until set (6 hours).

To serve: Unmold. Cut into slabs. Line a plate with lettuce or fresh herbs. Invert pate onto plate. Arrange a few cubes of tomato on top for garnish. Serve with crackers, French bread, or toast points.

Heat the oil to 365‑375 degrees F. Dredge the mullet in the cornmeal/black pepper mixture.

Place fish in glass baking dish, salt it, and pour lime juice over all surfaces of fish. Marinate 10 minutes.

Preheat the broiler to 500 degrees F. Pour off lime juice and mix with the butter. Put fish white side up in well‑greased baking pan, salt and pepper the fish, brush it with the lime butter, and sprinkle with the paprika/cayenne powder and chopped cilantro. Brush fish lightly once more with the lime butter. Broil 4 inches from heat for approximately 8‑10 minutes. Fish will flake easily when done. Put lime wedges in a dish to pass to diners and garnish each serving with the peeled orange wedges, cilantro sprigs, and green onions.

Make sauce:  Combine mayonnaise with the ingredients following except for the parsley. Chill sauce for at least one hour to mingle flavors. Preheat oven to 500 degrees F. Sprinkle fish with salt and pepper. Grease a 16 x 10 x 1‑inch baking sheet (pan should have sides at least 1‑inch high). Spoon on sauce and spread evenly on the surface the skinless side of the fish with sauce and place fish on baking sheet. Repeat for all fish.

Bake for 10‑15 minutes or until fish flakes easily; put fish under broiler for 1 minute or so to brown, if necessary. Sprinkle with the chopped parsley and chives. Serve with French fried potatoes and peas. Pass lemon wedges for those who want more lemon.

Fry bacon in a large pot until browned. Add onion and fry until transparent. Stir in the flour and let cook in the bacon fat for about 1 minute. Stir constantly. Add water, potatoes, salt, pepper, and bay leaf. Cook, covered, until potatoes are almost tender. Add the fish and cook no more than 10 minutes (check fish after 5 minutes to see if it flakes easily). Add the milk and cream; do not boil. When heated through, pour into serving bowls and garnish each serving a small sprig of parsley.

Pass crackers for those who want them. 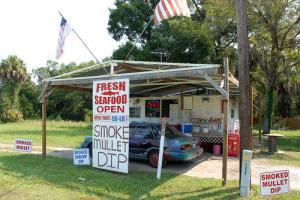 Mix the cream cheese and butter until smooth. Stir in cilantro, onion, and salt.

Spread cream cheese mixture on crackers, top with flakes of smoked mullet, and place a jalapeno slice on top of the mullet. Garnish each cracker with a sprig of cilantro. To serve, place crackers on a flat basket‑like tray ( a French cheese tray is perfect) and surround the edge of the tray with shredded lettuce.

[Note:  Some readers have asked about a mustard sauce for mullet. A version of this recipe, based on an oriental sweet‑and‑sour sauce, was published several years ago by the State of Florida Marketing and Fisheries Extension Service. To make the sauce more oriental in flavor, for dipping stone crab claws or breaded shrimp, omit the Worcestershire sauce and add the same amount of soy sauce.]

Mix all the ingredients together.

Bring mixture to a boil. Let cool. Use sauce with smoked mullet or batter‑fried mullet.

The Mostly Mullet Cookbook: A Culinary Celebration of the South’s Favorite Fish, by George “Grif” Griffin

The Wise Mullet of Cook Bayou (Revised First Edition), by Timothy A Weeks