The kulebyaka should be appetizing, shameless in its nakedness, a temptation to sin.
~~ Anton Chekov, “The Siren”

Fish dishes abound in Russian cuisine, in large part because of the Russian Orthodox Church’s strict rules on fasting during Lent other times of the year. But we cannot ignore the simple fact that fish thrive in the thousands of rivers and lakes crisscrossing the face of that immense land mass, bordered by twelve seas. Again we see the impact not only of human institutions on diet, but also the natural provisioning by the environment. (And, of course, the female imagination, for the tasks of cooking in Russia fell mostly to the women!)

As is usual in most of written history around the world, more information exists about the ruling classes, including what they put in their mouths and stomachs, like caviar. Elena Molokhovets’s book follows this trend, certainly. But there are other bits and pieces in Russian history that provide a glimpse of the culinary past.

One such source is the Domostroi, a book dating to the 16th century and filled with practical bits of information pertaining to Russian life.

In Elena Molokhovet’s Classic Russian Cooking: A Gift to Young Housewives, the final eleven chapters concern fast day foods. One of those chapters, “Fish for Fast Days,” expands on material from an earlier chapter (number seven) and provides simple, easy-to-fix recipes based on several varieties of fish — baked, fried, made into soup, patties, boiled, stuffed, etc.  Don’t forget that fish usually did not grace the poor and exceedingly devout believers eschewed it even if they could afford it.

Because so little written culinary material pertaining to Russia predates Molokhovets’s book, the recipes and menus (over 800 in the 1897 Russian edition!) that she includes likely represent traditional means of food preparation and preservation. Although she focuses primarily on upper-class households, her fast-day menus for servants could be taken as reflecting what poorer people really ate. 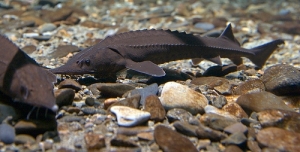 Information about quantities of fish eaten tends to be lacking, possibly due to the custom of housekeepers (or their servants) to meet the fishing boats as the fishermen put into shore with their daily catch. 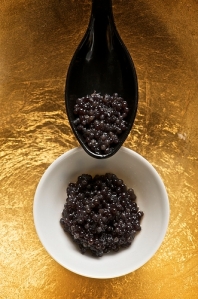 A form of fish consumption in Russia, among the poor as well as the wealthy, can be found in caviar,  a rich person’s delicacy today. However, caviar sustained the Russian poor as well as the rich in times past. (And shall perhaps be the subject of a another post.) So highly prized was the caviar of the kingly sturgeon that much overfishing occurred and finding sturgeon in today’s markets is a triumph indeed. (Environmental pollution contributes to the scarcity of sturgeon as well poaching and overfishing.)

Served in 1656, the following menu appeared on the fast-day table of a boyarin (nobleman):

Pirog with Fish and Sauerkraut

Of all the dishes mentioned in this menu, the one that surprises me the most is the kulebyaka, because of the butter necessary for the pastry. Technically speaking, this fish pie is not a true fasting-day dish, but rather an Easter dish,  for it also features eggs. Kulebyaka is just one of many rich pies found in the cuisines of Russia and Eastern Europe.

To try making kulebyaka, first read this account. Or get yourself  a copy of Darra Goldstein’s A Taste of Russia (1991) and make the recipe in its classic form, complete with layers of blinis.

*Viziga/vesiga, or spinal marrow of the sturgeon, appeared as a key ingredient in the more “authentic” French-influenced hot fish pie known in Russia as koulibiaca or coulibiac, also spelled kulebyaka. Dried whole, this whitish, gelatinous part of the fish became a delicacy mostly in upper-class Russian cuisine. For many people on the ill-fated Titanic, the taste of vesiga remained their final food memory, for the chefs served it as a garnish for the Consommé Olga served at the last meal on that doomed ship. As a substitute for vesiga, Darra Goldstein recommends Chinese bean threads, saying that Russians living in San Francisco do the same.