With this post, we continue on our journey of exploration , attempting to learn where eggplant came from and how cooks over the centuries treated it.

No discussion of eggplant can ignore baba ghanouj, a dish made with puréed eggplant and tahini (sesame seed paste). According to Nawal Nasrallah, author of one of the few Iraqi cookbooks in English (Delights from the Garden of Eden), baba ghanouj means “the pampered father;” a Lebanese legend suggests that “a dutiful daughter” … honored “her old toothless father by fixing him a treat of puréed eggplant.”

Like so many new foods introduced into a society, when eggplant arrived in the Middle East it faced skepticism and disdain.  In Medieval Arab Cookery, Charles Perry cites a Bedouin who said, ” Even if Maryam the mother of Jesus split it, and Sarah the wife of Abraham cooked it, and Fātima the daughter of the prophet served it, I would have no taste for it.”

Eggplant appeared in the Middle East around the ninth century, but did not become a major part of the people’s diet until the thirteenth. In fact, before the Islamic period, no mention of eggplant exists in the literature of the region. Yet the tenth-century cookbook of Al-Warraq provides six recipes for eggplant, as well as a poem praising the purple  “menace.”

Perry wrote a short essay (Medieval Arab Cookery) tracing the history of Būrān, an eggplant dish supposedly named after a ninth-century bride who married a Caliph near Baghdad. A dish made with exotic eggplant from India, with the name of bādhinjān. And the recipe that may be the ancestor of baba ghanouj — bādhinjān muhassā — called for vinegar and walnuts, not lemon juice and sesame paste. (Perry’s work provides another example how culinary historians might derive information about various recipes and ingredients, juxtaposed against social, economic, and political historical events of the times.)

In Lebanon, and throughout the Middle East, the dish shows up on mezze tables, eaten with pieces of pita bread ripped randomly and dipped into the creamy mixture.

Mezze. Strictly translated, the word means “hors d’oeuvre”, bringing to mind boring little droopy bits and pieces, reclining on stale crackers, tasting distinctly of chemical preservatives. For once, let’s ignore the literal translation and immerse ourselves in the words of Claudia Roden:

Mezze are one of the most delightful features of Middle Eastern food – not least because they are meant to be enjoyed in an unhurried way – indeed they are almost a way of life. From cafés by the Nile to mountain resorts in the Lebanon palatial villas in Morocco and Persia, savouring mezze with an ouzo, a beer, a syrup or a coffee can be a delight approaching ecstasy, part sensual, part mystical. The pleasure of savouring the little pieces of food is accompanied by feelings of peace and serenity, and sometimes by deep meditation.  (A New Book of Middle Eastern Food, p. 67-68)

Unlike some mezze in Lebanon, where a hundred different dishes with a hundred different tastes spread across the table, a simple mezze suffices: Tabbouleh (bulghur wheat salad with mint and parsley), hummus (puréed chickpeas with tahini/sesame paste and lemon juice), and baba ghanouj (puréed eggplant with tahini/sesame paste), just the basics, with many loaves of soft pita bread. And of course, sambouseks, or phyllo pastry filled with meat. Kibbeh (ground lamb), too, cooked in a dozen different ways, fried, grilled, stuffed, served with yogurt and mint sauce.

Since the best baba ghanouj comes from eggplants with few seeds, make use of an old method for determining which large purple eggplants contain the fewest seeds: smaller, younger, firmer eggplants tend to sport fewer seeds. An old-wives tale has it that eggplants with round scars on the blossom end are “male” and those with an oval scar are  “female.” The truth lies in the age of the eggplant — the more mature the eggplant, the “seedier” it will be and less meaty. And the skin of an eggplant provides another test of maturity — if the sheen is dull purple and not shiny, the eggplant is past its prime, over the hill. Use fresh eggplant within a day or two of purchase.

For a relatively extensive bibliography in English on Arab cooking, see my previous post on the subject. 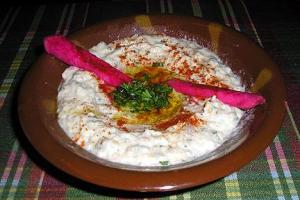 Peel the charred eggplant, removing any tough parts, and remove seeds. Squeeze gently over a strainer to remove as much of the bitter liquid as possible. Chop roughly and put eggplant in a blender. Add the remaining ingredients, except for the oil, paprika, cayenne, and parsley leaves. Purée. Place purée in a flat shallow dish and garnish with remaining ingredients. Sprinkle with the paprika, cayenne, and parsley, and dribble the oil over the top. Serve with warm pita bread.