Memories of Provençal food continuously whisper to me. And reflection forces me to draw the logical conclusion that the food of Piemonte, Liguria, and Provence share the same grandparents. Or even the same parents.

Countless, interminable wars guaranteed both the emigration and immigration of people (and food) over the centuries. Walking cookbooks, I call those people.

Like lovers’ lips touching lightly, Provence borders Liguria and Piemonte and drew (and still draws) denizens of light and lavender and life. Van Gogh, Gauguin, Matisse, Renoir, Dufy, Bonnard, Munch, Monet, Cezanne —  all these artists immortalized the landscape and the people of Provence. And legion the writers who took the rocks and bones of Provence and turned it into paradise! Peter Mayle, uncrowned king of the “I-bought-a-house-in-Provence (or Tuscany)” genre, comes to mind especially.

And, generally unmentioned, the cooks, of course, with their tricks, their trucs.

Culinaria France says, of Provençal cooking, “Varieties and eating habits owe a great deal to the nearness of Italy.”

And indeed they do.

No wonder that a bit of Italy perfumes the plates of Provence: Piemonte and Liguria made inroads politically and seasoned the cuisine. And, in the 18th century, people from Piemonte and Liguria moved into the region, primarily Marseilles. The Duchy of Savoy created a capitol city out of Torino and ruled from there until around 1720.

One of the most important dishes is the aforementioned Boeuf Daube à la Provençale. Cooked traditionally in a glazed earthenware pot called a daubière, the dish demands time and close attention on the part of cooks. 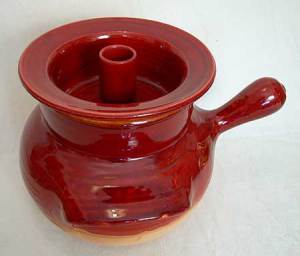 On daubières, Peter Mayle rhapsodizes in Provence from A to Z:

Serious daube-makers should consider keeping a pot — a dedicated daubière — just for this one dish. In Provence, a daubière is traditionally a deep, dark earthenware pot, and in the best kitchens it is never washed after use. Instead, it is dried over a hotplate or a flame, turning the remains of the sauce into a veneer, or fine crust, which impregnates the earthenware. Thus the ghost of the old daube adds to the flavor of daubes to come, an evolutionary process that fills some ultra-hygienic cooks with alarm. Accustomed to spotless stainless steel, their instinct on seeing a well-seasoned daubière is to scrub it — a tragedy.

Sort of like a cast-iron skillet around these parts …

One thought on “Italy in Provence”