‘The next we come to is the Rootabaga Country where the big city is the Village of Liver-and-Onions,’ said Gimme the Ax, looking again in his pocket to be sure he had the long slick yellow leather slab ticket with a blue spanch across it. ….

Rutabagas (Brassicca napus), also called “swedes,” meaning “thick root” in Swedish (rotabagge), look for all the world like a turnip gone wild. Botanically,  rutabagas combine the genes of both cabbages and turnips. Originating most likely in the extreme far north of Europe around the seventeenth century, some say in Finland and others say Bohemia, rutabagas traveled with migrating human groups to other regions of Europe, as well as England and Scotland.

The Scots dubbed rutabagas  “Neeps,” as in “Tatties and Neeps,” a dish of potatoes and rutabagas often served with haggis. (Click on “Neeps” above to see what the Oxford English Dictionary has to say about this word.)

During World War I, starving Germans survived the Steckrübenwinter (rutabaga winter) of 1916-17 by eating nothing but rutabagas.

And during World War II, in the Lodz Ghetto on February 6, 1943, Lucjan Dobroszycki recorded this observation on rutabagas, which became a food eaten once again under famine-like conditions:

Today’s primary source of food is the rutabaga. This highly sought-after item has stimulated not only the populace’s appetite but also its resourcefulness: people prepare all sorts of palatable dishes from the often very tasty sweet root, which is sometimes yellow, sometimes white. Rutabagas are used in cakes in place of apples and, with the addition of some lemon juice and sugar, do indeed simulate the taste of apples. Rutabagas are used in soups, prepared as a vegetable, “à la asparagus,” or, according to personal preference, instead of carrots. They are, however, primarily eaten raw because of their nut-like flavor; white rutabagas, in particular, taste like coconut. On the other hand, rutabaga has been jocularly termed “ersatz cheese” because of its typically yellow or white, honeycomb appearance. 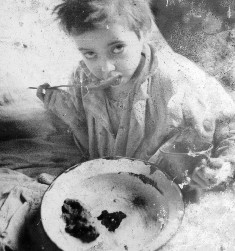 Since then, rutabagas have taken on the aura of a “famine food.” And writers about war pull no punches about the lifesaving virtues of the humble rutabaga.*

Goiters often result from over-consumption of rutabagas, thanks to the cyanoglucoside present.

And guess what — modern revisionists claim that before the arrival of the pumpkin, Druids hollowed out and carved rutabagas for their fall festival of Samhain.

Winter is a good time for eating rutabagas. But to eat them in winter, one must plan ahead. Thinking of planting rutabagas during the next growing season? Check out the following list from the Illinois State Extension Service for types and how to plant:

Nutrition notes: Rutabagas provide vitamin A and potassium, as well as 35% of a day’s vitamin C requirement. A 3-oz serving contains about 34 calories.

Sauté the onion in the olive oil over medium heat. Toss in the sausage and ham; cook until sausage is warmed through.

Put potatoes, rutabaga, turnips, carrots and onions in a large pot. Cut the cabbage in half cabbage with core intact, and add to pot. Season with salt and pepper. Place sausage and ham hocks on top. Pour in water or stock.

Bring to a boil, reduce heat, and simmer for 30 minutes, or until vegetables are tender.

Another suggestion for cooking rutabagas from Melody Rose : Roast them.

Peel the rutabaga and cut into cubes about ¾” square. The chunks should be close to the same size so that they will roast evenly. Toss with a couple tablespoons of olive oil, your favorite herbs and a scant teaspoon of sugar or maple syrup. The sweetener will caramelize while the rutabaga is roasting and brown the edges attractively. Roast uncovered in a 400 degree oven for about 45 minutes, or until the rutabaga is tender. To brown the edges, if they need a bit more, broil for a few minutes, but watch it carefully.

Rutabagas can be roasted alone, or in combination with other root vegetables. A variation on this recipe can include cubed carrots, parsnips, onions or turnips. Serve as a side dish for beef or pork along with a green vegetable and a hearty bread, creating a filling, nutritious meal for the dark winter months.

*Love and Rutabaga: A Remembrance of the War Years, by Claire Hsu Accomando