For most Americans (and Britons), French food means memories of the insipid Steak au Poivre or bland French Onion Soup served in a pretentious “fancy” restaurant. That’s enough to condemn French cuisine to staying put between the covers of Julia Child’s Mastering the Art of French Cooking (1961 and 1970).

The perplexing and continuous popularity of Italian cuisine shoved French cooking off to the side. After all, it’s the rare person who finds time these days to cook stock from scratch (and even if you wanted to, you usually can’t find meaty bones to save your life. Look at the popularity of short ribs!). And all that fussy straining and stirring and cutting precise little mirepoix stuff — who needs it?

And yet, and yet there’s some pretty good (and simple) French food just waiting to burst on the food scene again (it’s about time, as we’ve run the gauntlet of Thai, Spanish, and Asian fusion, as well a dangerous flirtation with low-carb).

A recent article by Bruce Palling in the October 15, 2010 The Wall Street Journal, popped the question that I ask myself a lot of the time: “Is French Fare a Spent Force?,” a look in this case at the British culinary view of their Gallic cousins across the Channel. A fresh version of the Hundred Year’s War, rife with nationalism issues.

When food writers stereotype a cuisine, and that is what I think has happened with French cooking, it’s hard for people to see past the so-called pillars that they think frame the whole. Boned duck, pastry-covered meat, and interminable ingredient lists do not make French cooking.

How could it? Male chefs of haute cuisine notwithstanding, women — peasants most of them — did most of the day-to-day home cooking, a squirming baby straddling one hip and another grabbing a frayed skirt and still another wriggling in the womb. A sausage from the rafters, three potatoes from the larder, and a big red onion, that would more likely be dinner than a ballotine. Cuisine grand-mère, as the French call it.*

You see, France still produces great local food and much of traditional food represents ways to preserve that richness. Soups, gratins, and all kinds of simpler dishes exist, utilizing those “hot” local foods. just not in most restaurants. 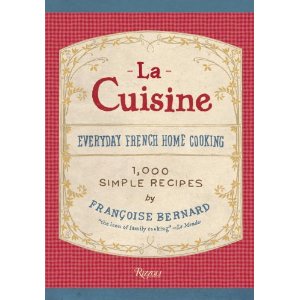 And cookbooks like the newly released La Cuisine: Everyday French Home Cooking, 1,000 Simple Recipes, by Françoise Bernard, might be useful to a certain extent in bringing French home cooking to the forefront. As Food & Wine contributing editor Jane Sigal says in the Preface, “La Cuisine offers a portrait of the way the French were eating in the second half of the twentieth century.” Slightly bland, and true to Bernard’s background in industrial food manufacturing (margarine — in France!), La Cuisine includes canned products a tad bit more than you might prefer. For that reason, you ought to take a look too at Jenny Baker’s cookbooks, for example, Simple French Cuisine: From Provence and Languedoc.

Rustic French food, a sensuous joy to cook, a secret just waiting for the right stage of enlightenment.

That’s why soon, very soon, people likely will wake up and smell the butter browning.**

*There are dozens and dozens of books — in French — devoted to this concept. To get started, check out Marie-Pierre Moine’s Cuisine Grand-Mere: Traditional French Home Cooking (2001), though be forewarned that Marie-Pierre’s grandmother really didn’t cook. Being bourgeois, she hired a cook named Madeleine.

**Or the olive oil. Or maybe even lard!

(Adapted from a recipe by Françoise Bernard)
Serves 4

Preheat the oven to 350 degrees. Grease a shallow baking dish large to hold everything. Heat the butter in a large heavy skillet until bubbling. Put the potatoes in a heavy-bottomed skillet and sauté until they  start to turn golden brown on each side. Add the onion and cook until onion is starting to turn golden on the edges. Season with salt and pepper. Turn potatoes and onions occasionally to keep from burning, but don’t turn them so much they don’t get a chance to brown. Mix the mustard with the wine. Put the potato-onion mixture in the baking dish, top with the sausages and pour the wine-mustard over the top. Bake for about 45 minutes. If the liquid evaporates too much, cover the dish with foil before it gets too dry and continue cooking.