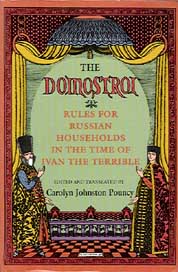 Trying to ferret out tidbits about Russian food history can be tough going.

Aside from the language barrier, anyone interested in Russian culinary history suffers from a major weakness: there is a terrible lack of written material contemporaneous with Forme of Cury and other such books found in the Western culinary history lexicon.*

Happily, however, there’s Carolyn Johnston Pouncy’s translation of the sixteenth-century Russian household management book, The Domostroi. Elena Molokhovets, and other Russian cookery writers like Ekatrina Avdeeva and S. Drukovtsev, no doubt knew of The Domostroi and it may well have heavily influenced as she wrote her classic A Gift to Young Housewives (1861).

The Domostroi consists of sixty-three relatively short chapters, telling Russians living during the time of Ivan the Terrible how to behave themselves and how to run their lives and households. Heavily influenced by the Orthodox Church,** The Domostroi (or Domostroj) runs the gamut from prayer to pickling.

In certain passages, it recalls somewhat the style and content of St. Benedict’s Rule.

Long thought to be written by a priest named Sil’vestr, consensus among scholars suggests that multiple authors created this rare written insight into Russian life. Naturally, because of rampant illiteracy, only a few people could actually make use of the book. But those people, boyars (nobles) and church authorities,  obviously wielded the power and held the purse strings.

Not entirely about food,  The Domostroi nevertheless provides a great deal of information about food, its use, its production, and its storage.

Here, for example, is a list of foods appropriate for Lent:

Another section of The Domostroi suggests other dishes that in addition to the dishes mentioned above:

On Saturdays and Sundays throughout Lent people put out … dried mushrooms; mushrooms fried in butter; pies stuffed with millet, viziga, and peas; carp stuffed with fish, millet, and viziga; fritters …

On cooking cabbage or other greens for feast and fast days, The Domostroi says:

Chop cabbage, greens, or a mixture of both very fine., then wash them well. Boil or steam them for a long time. On meat days, put in red meat, ham, or a little pork fat; add cream or egg whites and warm the mixture. During a fast, saturate the greens with a little broth, or add some fat and steam it well. Add some groats, salt, and sour cabbage soup; then heat it well. Cook kasha the same way: steam it well with lard [not on fast days], oil, or herring in a broth.

So many factors flit about in the background when it comes to Russian food history: serfdom, famine, war, Communism.  And we mustn’t forget the weather — the brutal winters suffered by most of Russia meant at best a decent growing season of three months and furious energy in devising preservation methods and carrying them out.

I’m left with hungering for more understanding, for more knowledge, about just why the quantity of Russian culinary writings seem to pale in comparison to what we find in the West.

*Another drawback is the lack of translations of pertinent material that actually exists. (Think the writings of Russian food historian V. V. Pokhlebkin.) If scanned material exists, it can be run through translation software, but as to whether or not the meaning is lost in translation? Well, only a person really familiar with Russian can tell. Can you imagine what would have happened had our government insisted that we learn Russian during the Cold War? I mean seriously, many Russians applied themselves to learning English …  and we did not learn Russian. Anyway, like I said, no translation software beats really knowing the language.

**No surprise there, given the stranglehold that the Church had on all aspects of life, much in the same way the Roman Catholic Church did in the West. Recall that Orthodox Easter usually falls later than does the Western date, although the date for both Western and Eastern Easter are the same in 2010 — April 4.