Many years ago, a high school history teacher of mine asked our class to write down everything we knew about Russia within the space of about 30 minutes. Most people wrote a brief paragraph, describing the red Communist flag with its hammer and sickle. Some delved a little into the cruelty of the tsars and others brought up the dark and heavy literature of Dostoevsky. Still others spouted all the Cold War propaganda about the dangerous spread of Communism.

I wish I could say that I wrote at least a sentence about Russian food, but I didn’t, being at the time enthralled with the skullduggery surrounding Rasputin’s relationship with Tsarina Alexandra.

Nobody else wrote a word about the food, either. For nobody knew anything about Russian cuisine, to be honest, except that Russians supposedly loved their potato vodka. And pearly caviar, of course.

To speak of Russia and her food means, I think, starting with the Russian Orthodox Church and its Great Lent, the 49-day period before Easter.* There is no doubt that the stringent restrictions of the Eastern Church did much to create Russian cuisine.

Once again we turn to an English observer in the thick of the Empire to set the stage, as it were, for the beginning of our foray into Russian cuisine: Lord Algernon Bertram Freeman-Mitford Redesdale, a British diplomat who spent time in Russia, China, and Japan. The famous English writers, Jessica and Nancy Mitford, called him “Grandfather.” Redesdale wrote at length about his travels and experiences as a diplomat.

This is what he had to say about Russia’s Great Lent:

Lent, above all, is a sore trial to these poor people, but they bear it cheerfully. During these six cruel weeks they taste nothing but the poor and sordid food which is all that the Church allows them — an ugly soup made up of dried toad-stools, collected in summer and sold by the string, onions, pickled cucumbers, coarse cabbage, dry radishes, horse-radishes, and black bread; these ingredients are mixed with an evil-smelling black oil made from hemp. The untempting mess of pottage is washed down by with draughts of cheap kvass, a poor sort of beer brewed of rye and a little malt — a drink scarcely less nasty than the food. Upon this scanty diet the mujik grows thin, but he tighten his belt and goes about his work, kept in his heart by visions of drunken happiness as soon as the last stroke of twelve on Easter Eve shall have rung the knell of his misery. (Memories, Vol. 1., p. 260, 1915.)

One wonders what a Russian would have made of kipper paste or even haggis, no? 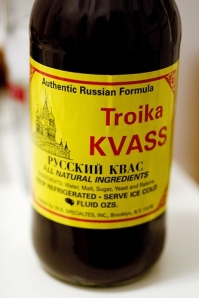 GRAIN KVASS [Kvas khlebnyj krasnyj]
Kvass can be made from just about anything, no surprise there. Classic Russian Cooking: Elena Molokhovets’ “A Gift to Young Housewives” (originally published in 1861), which we will examine later in more detail, contains six recipes for kvass, including one made with raspberries and strawberries. Note that the alcoholic content of kvass was .07 – 2.2%. The following comes from Molokhovets’s book.

Pour the rye flour and the malts into a tub or vat. Set aside 1 lb each of the wheat and buckwheat flour and add the rest to the vat. Pour in enough warm water to make a thick dough. Bring a kettle of water to a boil, pour the boiling water into the dough all at once, and stir until smooth. When the oven has been heated, prepare two kettles, ladle cold water into them, immediately add the dough, and set in a very hot oven that has been swept out, but with hot coals left on both sides. Seal the oven [door] with clay. On the next day — that is, after 24 hours — remove the kettles and top them up with warm water. Set aside for 1 1/2 – 2 hours, until the crusts are soaked. Return all the dough to the vat, mix thoroughly, and add 2 pails boiling water. Mix again, add 4 pails cold water, stir several times, add a small piece of ice, and let the mixture settle.

Meanwhile, prepare a leaven by pouring the remaining 1 lb each of wheat and buckwheat flour into 2 ladles of the just-settled wort. Add 2 glasses yeast, mix, cover, and set in a warm pace to rise. When the must in the tub has completely settled, pour off the 6 pails of liquid into a 12-pail keg and add the the raised leavened dough.  Pour another 6 pails of cold water onto the dough that remains in the tub, mix several times, let settle again, and pour off into the same large keg.

Take a little of this kvass, add some mint, and bring to a boil. Remove from the stove, cover, and let cool. Strain into a keg or add the mint leaves as well. Plug the keg securely and transfer the kvass to the cold cellar in summer, or, in winter, to a dry basement where it will not freeze. The kvass may be used after 2 days.

*The Russian Orthodox Church decrees 49 days versus the 40 of the western Church.

What I see on my daily walks.
Couscous with kefta in tomato sauce.
Day 30 of social distancing. Dreaming and Wishing - gherkinstomatoes.com/2020/04/14/dreaming-and-wishing-being-in-a-state-of-siege-coronavirus-covid-19-day-30
Big batch of sofrito getting done.