With Lent fast approaching (February 17, 2010), an examination of fasting and other fleshly challenges seems apropos.

Religious-based fasting, in the history of English speakers anyway, belies its importance in the commonly used word for the first meal of the day: breakfast or “break fast.” After all, for much of Western European history, almost half the days of the year counted as times of fasting.

Locavores and vegetarians today will find much to inspire them in the dishes created to get people through the harsh Lenten seasons of the past. Coinciding with the “lean months” of winter, Church-decreed fasting eschewed fats like butter and lard,* eggs, cheese, milk, and, of course, meat during the forty days of Lent, the period before Easter Sunday.  (Is it no wonder that bacon and eggs became such a popular dish first thing in the morning?) 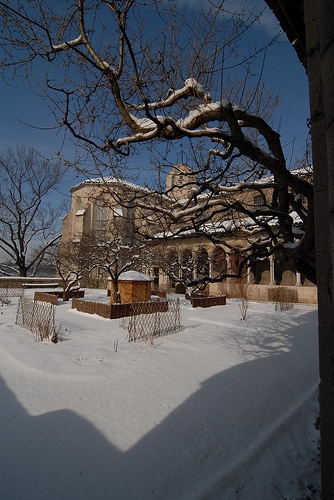 The Black Fast** required people to eat only one meal a day, and that only after the sun went down. No alcohol was allowed and just prior to Easter, during Holy Week, people subsisted on bread, salt, herbs, and water. Part of this traditional practice of fasting owes something to the seasonal fluctuations in food supplies: to make their stores last longer, people ate less.

After the tenth century, people could eat their one daily meal at three in the afternoon. In the fourteenth century, Church law permitted cooks to serve this meal at mid-day (“none”). One could enjoy a “collation” (or light meal) in the evening, too. A softening of the rules occurred at the beginning of the nineteenth century and allowed a sip of coffee and crust of bread in the morning, as well as the noon meal. Nowadays, Church rules require fasting only on Ash Wednesday and Good Friday, and abstinence from meat eating on all Fridays during Lent.

Remember the impossible old question, “What came first? The chicken or the egg?” The same riddle applies to the dishes eaten in medieval monasteries, which influenced the cuisine of Europe and beyond. It’s difficult to determine if the recipes served in the monastery kitchens sprang from the hearths (hearts) of the medieval mothers who raised the men who became monks and priests of the Middle Ages, or the women who became nuns, or if monastery cooks used those dishes as the fond, the basis for their own recipes.

One thing is for sure: fish became very important in Europe because of the Church’s fast days. Mark Kurlansky covered this in his Cod: A Biography of the Fish That Changed the World (1997), as did Brian M. Fagan in Fish on Friday: Feasting, Fasting, and the Discovery of the New World (2007). A prime example of the impact of demand for a food product changing economies, lives, and nations.

4 slices of raisin bread about an inch thick

Simmer the chopped shallots in 3 ½ T. of white wine, without browning. Set aside and let cool.

Mix the cooked shallots with the washed, dried, and chopped herbs. Set aside.

In a heavy pot, bring the rest of the white wine to a boil to get rid of the alcohol taste, add 1/3 of the stock to pot and reduce the volume of liquid to ¼ of what you started out with. Repeat this process twice with the remaining stock.  You should have about 1 quart of liquid by the time you are finished.

Season the broth with the juniper berries, salt, pepper; add the barley. Set aside.

Toast the bread slices, rubbed heavily with the cut garlic, and cover each of the four slices of bread with ¼ of the prepared herbs.

Place one bread slice inside each of four deep bowls, and pour the hot broth around the bread.

*A “Thank you” to Ken Albala for pointing out that olive oil was not one of the fats prohibited in the Western Church, but in the Eastern Orthodox Church it was.  A little research gave me the reason for this — originally olive oil (and wine) were stored sometimes in animal skins.