October 31 is Halloween, the Eve of All Saints’ Day, a night specially devoted to love-divination ceremonies, and other superstitious customs such as we have noticed in a previous chapter. The game of hanch-apple is a favourite Halloween pastime, so much so that in some districts Hanchin’-neet is another name for Halloween. The game consists in biting at an apple floating in water, or suspended by a cord.

The word “hanch” means, in Lancashire dialect, “to bite, to snap.” As in “Th’ dhog hancht at him.”

In The Book of Days: a Miscellany of Popular Antiquities (1883, p. 519),  Robert Chambers explains how this giddy practice happens:

As to apples, there is an old custom, perhaps still observed in some localities on this merry night, of hanging up a stick horizontally by a string from the ceiling, and putting a candle on the one end, and an apple on the other. The stick being made to twirl rapidly, the merry-makers in succession leap up and snatch at the apple with their teeth (no use of the hands being allowed), but it very frequently happens that the candle comes round before they are aware, and scorches them in the face, or anointe them with grease. The disappointments and misadventures occasion, of course, abundance of laughter. But the 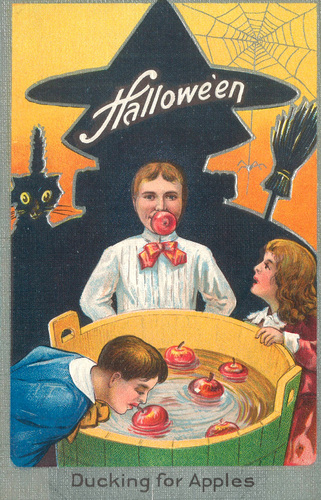 grand sport with apples on Halloween, is to set them afloat in a tub of water, into which the juveniles, by turns, duck their heads with the view of catching an apple. Great fun goes on in watching the attempts of the voungster in the pursuit of the swimming fruit, which wriggles from fade to side of the tub, and evades all attempts to capture it ; whilst the disappointed aspirant is obliged to abandon the chase in favour of another whose turn has now arrived. The apples provided with stalks are generally caught first, and then comes the tug of war to win those which possess no such appendages. Some competitors will deftly suck up the apple, if a small one, into their mouths.

Note: for the next two weeks, I’m working on a couple of intensive writing projects, so “Gherkins & Tomatoes” will of necessity be brief, with a look at “Saints, Souls, and Haints” in honor of the ancient traditions of Halloween, All Saints’ Day, and All Souls’ Day. “Haints” comes from a slang term used for “ghost” in the American South.