[Note: Apologies to readers who tried to access The Forme of Cury online link yesterday—for some reason it was linked to something else! Anyway, the link is now correct and works, so if you want to see it, go to my post on The Forme of Cury. Thanks for reading!]

Although Italian cuisine is all the rage these days, in my house as well as in the media and many restaurants, very few Italian cookbooks reach the bar of expertise and excellence that the following French-oriented cookbooks do. Unfortunately.

These are the cookbooks to grab when the waves hit you and life turns rough. When the desert island looms. Life preservers, as it were. But for good measure, I’ve also thrown into the mix a heavy Mediterranean cooking opus that might sink your life raft should you really be heading out to any island, desert or otherwise.

Behind every recipe, a story always hovers. Or even several stories.  French Provincial Cooking (Elizabeth David), When French Women Cook (Madeleine Kamman), The Auberge of the Flowering Hearth (Roy Andries de Groot), and A Mediterranean Feast (Clifford Wright) all go beyond the ubiquitous listing of ingredients, followed by trite and terse instructions on how to prepare the dish. There is nothing of the fundraising-church cookbook or the early Junior League cookbooks in these works of art.

All of these books meet my personal criteria for excellence: stories and anecdotes, historical information, international focus, and information on ordinary and not-so-ordinary ingredients.

Great cookbooks tell stories, great stories, which are really what food is all about.

And, best of all, timeless cookbooks buck the current trend of lavishly illustrated cookbooks, where there’s a photo of each finished recipe and, in some cases, a photo of each step used in preparing the recipe. Without photos, the authenticity of the author and the author’s writing skills suddenly become terribly important.

A case of separating the sheep from the goats, the aspic from the Jell-O, so to speak.

Coleman Andrews, editor and founder of Saveur magazine, once said, quite sarcastically, that food writing used be full of statements akin to a sports writer saying, “Magic Johnson was the best quarterback the Dodgers ever had.”

That’s why writers like Elizabeth David, Madeleine Kamman, Roy Andries de Groot, and Clifford Wright stand out. Their work and words feel authentic. They teach me. And, most importantly, their words elevate my soul.

Elizabeth David’s recipes in French Provincial Cooking, gathered during years of traveling throughout the provinces of France, remind me of a friend writing me a letter about a great recipe that she tried at her last dinner party. My old paperback Penguin edition, printed on acid-rich paper in 1978, bought while I lived in Honduras in the early 1980s, falls open to my favorite meaty stew recipes, and holds together only because of the wide clear packing tape nestling along its spine. I’m going to have to buy a new copy one of these days, keeping the old food-stained and annotated (“Great! Add more pepper.”) copy on the shelf.  There’s nothing rigid in this book, none of the precision of Julia Child’s recipes in her red, white, and blue-covered Mastering the Art of French Cooking, none of the trepidation I feel when faced with Julia’s recipes. Few of David’s recipes are longer than a paragraph. And all are well written, full of opinions, full of advice, and full of the wisdom that only comes from experience, from tasting and cooking over and over again. Coming from an Englishwoman at the end of wartime rationing in Britain, this book spoke to the British longing for a sense of normalcy after long years of war.

Baron Roy Andries de Groot’s prose in The Auberge of the Flowering Hearth is also sublime, exceedingly so. This English public-school-trained Dutchman’s erudite linguistic and culinary meanderings eliminate the need for photographs in his books. So clearly does this man see his world that most readers would be shocked to learn that de Groot was blind for a major part of his life, due to a botched eye operation in an attempt to restore vision he lost because of detached retinas during the London blitz. Much would be lost if a photograph took the place of his opening description of the book’s setting, “It is now fifteen years since I first approached the forbidding granite wall of rock…” near Grenoble in eastern France. Intertwined with the food stories are stories about the two old women who own the auberge and the Benedictine monks who settled there in the early 900s and still make Chartreuse liqueur. And a few lines later, my mouth waters non-stop beginning with his rendition of the alpine cheese soufflé eaten on porcelain plates flanked by a glass of Alpine Crèpy, eaten in the shadow of a “sun-splashed forest.” The authenticity of de Groot’s work takes shape with recipes that end with comments like the following visually intriguing statement: “Rush pie [Roquefort Cheese Flaky Pastry Pie] to the table and serve on very hot plates.” I know that he experienced the need to rush the pie from a hot oven to the hot plates, that something is lost if that act is not completed. 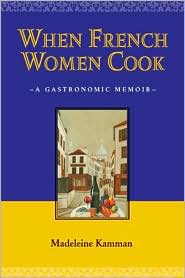 Also concerned with Alpine France, Madeline Kamman’s When French Women Cook, subtitled “A Gastronomic Memoir,” recreates the lives of her cooking mentors with stories of family and friends who cooked for her as a child growing up in the Savoie region of France. Shopping in pre-war France, seen through the eyes of a child, becomes a jewel of a memory. In the aftermath of the war, hard times also become memory made visible as I listen to these women telling their stories of having to make do with whatever they can scrounge up to feed their families. In the lingua franca of women everywhere, it becomes clear just how cooking evolved. Hunger is the mother of invention and mothers invented food that would entice a sick child to nibble or a grouchy husband to eat. Reading these stories, I smell Madeleine’s great-grandmother’s kitchen, and feel her stiff black skirt as I trail behind her at the open-air market. Hot soup burns my lips as I dangle my feet above the splintered wooden floor in the kitchen, and I learn how to make a stock and shell beans by watching grand-mere’s lightning-fast wrinkled hands.

Cooking is the work of poor women feeding hungry families. Cuisine is a different thing all together. 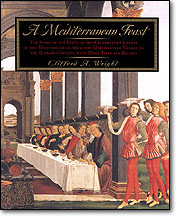 Immediacy of experience lessens somewhat as I read Clifford Wright’s scholarly magnum opus, A Mediterranean Feast. According to Wright, “Cuisine is an urban phenomenon.” And the tone of his book focuses on the huge port cities of the Mediterranean and their economic and political history. Food becomes, for Wright, a metaphor of that history. Only when economics transcended the family ties of the clan did a global economy become feasible. Once that happened, the world changed forever. This is the story that Wright tells through recipes, sidebars, information boxes, and mini-essays interspersed throughout the book. More like watching a documentary than a romance film, nevertheless this book makes me want to know more and more. Whiling away the hours of a winter afternoon, curled up in front of the fireplace with the coal gleaming red hot, I imagine myself in all the exotic and warmer places that Wright knows so well from his years as an analyst for a prominent Washington political think tank.

Although I lived in Morocco for two years, I learned only in Wright’s book that my favorite Morocco dish, Bastilla (a pigeon or chicken pie in a flaky crust) is of Jewish origin, originating with the hundreds of Moriscos fleeing Spain in the early 1600s. Ending up in Fez, that city of medieval overtones even today, the Jews worked their magic in the kitchen and the dishes of Fez inched their way into the palaces of the emirs. Fez, where smoke-filled passageways wind around tiny shops buried in ancient walls, where the labyrinths of the old city challenge the visitor at every turn, and where wonderful rugs and ornate brass work rise out of the gloomy light like treasure troves in pirate caves.

And so that is why people read some cookbooks as if they were novels. Always there is the element of surprise, like a good mystery story.

Yes, these books would be good companions, the cook’s Man Friday, on a desert island!